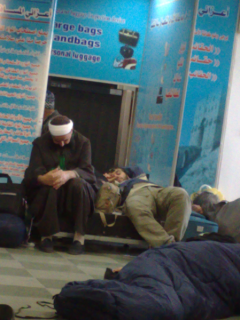 Today was an all nighter, the bus drivers were brought back and eventually we went to the airport, the only problem was that there were more delays. And people were a bit more annoyed as we could have just stayed asleep at the Seaside Compund, as it was only about 30 minute drive form the airport.

People were sleeping everywhere, even on the baggage scanner machines, but you should have sene the look of the staff when they arrived for work in the morning. We had turned their airport into a giant refugee camp.

Myself, Brother Ziad, Brother Talha, Brother Laif and Brother Jamaal decided to head into town, we were on the other side and it was difficult finding somewhere to eat. Eventually we found a small place, had a nice simple breakfast, and then made our way back to the airport.

We only made it with minutes to spare, they were all getting ready to board the plane, we were literally the last ones, but it all worked out well, Alhumdolillah.

The plane was lovely and we were glad to be flyng off, and getting closer to Gaza. On arrival into Egypt we were herded into the Arrivals room, it is just one giant room. They took all our passports, only in Egypt does it take 7 hours to log in 150 odd passports.

The situation was also tense as they were being awkward with certain memebers from the second flight, who were still stuck at the airport Arrivals as they Egyptian would not give them their passports back.

Incidently it was the brothers who were refused entry in to Egypt last year and sent back. That was very sad, especially as all of the Brothers were very nice genuine people. Then there was a mini-riot as tempers flared up.

But worse was still to come.