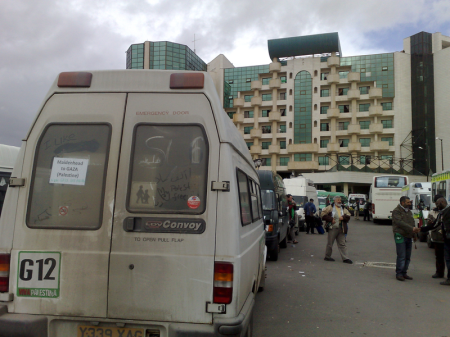 Woke up to a lovely morning, the night with Brother Arif was not too bad, he sure loves to talk. Almas didn't make it to the room, sorry the Luxury Suite (check out the photos) .. then as usual there were issues and disorganisation, we were told to check out and be ready to leave, but not when we were going to leave or where we were going to go. It was another fine mess .. I checked out and got ready to go, but then I decided to ask the experts .. not the VP "organisers" but Brother Farooq from the Turkish IHH, he told me to check-in again as we were not leaving until tomorrow .. then I aksed Kevin, and he said check-out be ready to leave .. I took the smart gamble and decided to ignore Kevin and made a scramble for the check-in desk, it was pure chaos over there.

I just about managed to get our original Luxury Suite, just before it was going to be nabbed by somebody else. I felt so releaveed and headed back upstairs. I spent the rest of the day just relaxing, this time Brother Arif had disappeared so we adopted Brother Mohammed Jordanian, he was very nice to us back in Jordan earlier, and is a very genuine person, journalist in the making.

He had not slept so was very tired and just knocked out. Eventually he woke up and we thought about popping out into Damascus city centre. I still felt rough but did fancy some exercise and a break, so off we went. One of the brothers wanted to find a cash machine, soon his minibus was full and we all got a free ride into town. Myself and Mohammed jumped off and searched for a local restaurant that he knew about. But first we went to this ice cream and dessert shop, it had bene there for well over 200 hundred years, maybe more.

Interesting fact, Damascas is the worlds oldest continually inhabited Capital City. We then went towards the old Masjids (Mosques) and visited the Umayyad Masjid, which is also known as the Grand Mosque, this is an interesting but strange place. To be honest the history is full of bloodshed, it is very central to the story of the Sunni-Shi'ah conflict, personally I actually genuinely feel sorry for the Shi'ah, what happened to Imam Husayn was wrong, and totally un-Islamic. For more info click here .. Umayyad Masjid

But then again it is also the burial place of Saladin Ayyub, in my views one of the greatest Muslims ever, we should all aspire to be like him as much as possible. Obviously we should aspire to be like the beloved Messenger Muhammed first, but personally Saladin comes a close second for what he stood up for, and the way he achieved his goals in life. For more information about him, click here .. Salah ad-Din Yusuf ibn Ayyub

We then found a nice relaxing restaurant, although the place was full of smoke, the No Smoking ban hasn't reached Syria yet. The food was simple but nice and then we continued our walk around the City. Just by total chance we walked past the Masjid and shrine of Sayyida Ruqayya, again more controversy. There was a tour group over from Afghanistan, so we sneaked in with them, and prayed Esha salaat. This is another shocking story, the side by the Shi'ah view point is very tragic indeed, basically following the massacer at Kerbala, the surviving members of the Beloved Prophets family were taken prisoner and marched to Damascus.  For more information click here .. Sayyida Ruqayya

We also visited the Old Vine Hotel, Brother Muhammed stayed here previously and wanted to show me it, from the outside it looks dull and plain, but once you walk in, it is like an oasis, a real 5 start Boutique Hotel, it seems rather unreal when you look at the hussle and bussle outside.

We then made our way back to the Sahara, for another relaxing night, a night of recovery for me, to be honest I kept waking up and coughing my guts out, but at least it was in a warm room.

GOOD NIGHT was at the Sahara, they were very nice to us and enjoyed having us as guests.

TOP TIP - Damascus is a massive city, if you don't speak Arabic or have any local knowledge, be very careful. You can easily get lost in this place. But it is worth a good exploring session as there is so much history over here. But brush up on your Arabic.