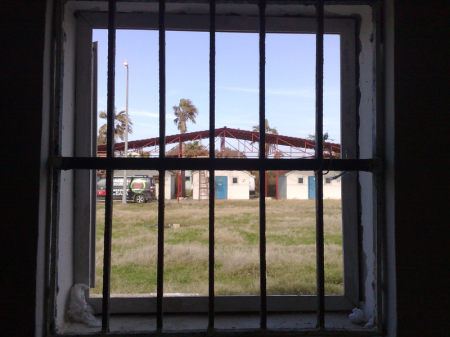 Woke up to a very windy morning by the beach, our vehicles were covered in sea salt now and it took a while to clean them up. It was a usual 8am start, which went on to 9am, then 10am, then 12 midday, then 1pm, then 3pm and it was 4pm before we all finally left the Beach Resort compound, prison type place.

We headed to the Port and it was nice to see the Turkish chartered ferry, it sailed full speed from Libya to reach us at Lattakia. We started loading up, it took almost 3 hours for us to load up all 200 odd vehicles and then get back to the compound. It was sad leaving the vehicles in the ferry and keys in the ignition, but there was nothing else we could do. But I was happy in the knowledge that they were in the hands of very trusted and highly respected Turkish Brothers.

We all headed back to the compound and decided to head out into town again, as there was not much to do in the compound and people were starting to feel unwell. We waited outside almost half an hour trying to hail a taxi minibus, but they were very full, out of the hundreds of Minibuses which drove past, we were fortunate enough to jump on the same one as yesterday, which was amazing, Alhumdolillah. So this meant another free ride.

We just had some munch and now are at a Cafe using the free Wi-Fi, over a dozen of our crew have come in here, we all swarm here to use it.

We are hoping to fly out in the next few days, but it all depends on how things go. On the diplomatic front it appears that the illegal state of israel has decided to extend the exclusion zone, thus is making our ferry take a longer route, but this will just mean more chance of us and the ferry arriving at El Arish at the same time, Inshallah.

Good Night will be at the beack resort again, even though it is a bit run down, we are getting used to it, if only the toilet facilities we're better, thankfully this Cafe has some real facilities. I'm not moaning, but after recovering from a serious illness, I need some comforts.

TOP TIP - When you can relax, make sure to relax. When things are calm, it is usually the calm before the storm, so best to also take this time to get prepared.