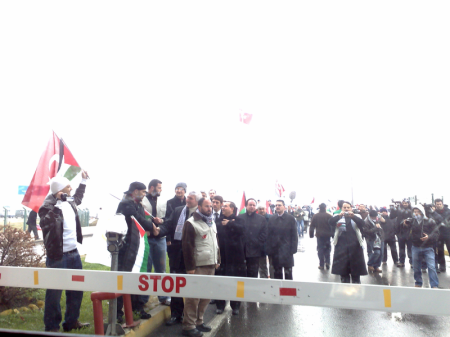 Today was going to be a very busy day, it was the day we would cross into the Islamic world and enter Turkey. My views of Turkey are that it is suffering from an identity crisis, on the one hand it has rich and strong Islamic heritage, but on the other hand it is desperate to become accepted into the European Union. Sadly the EU is not as willing to accept Turkey, which is a shame as Turkey has a lot to offer Europe.

I had never been to Turkey before but studied about it in History and the great Ottoman Empire, so was really looking forward to this part of the journey.

So we woke up very early and drove to the border, it was funny as we crossed over the bridge, the Greek side had it painted Blue and White similar to the national flag, and the Turkish side had it painted Red and White, similar to their flag. The soldiers looked very pleasant, but there was an underlying sense of tension, between these two historical former super powers. The border was pure chaos, the organisers as usual didn't know where to go, and it was a lot of hassle for those people that did not stay up all night doing their manifests.

After collecting our visas at a cost of 10 Euros, we had to go to booth 1 with our Customs Manifest, they kept one copy and stamped another, then we had to take the stamped one to booth 3 where it would be signed off, then we could go queue up at the barrier.

As you can imagine a lot of people turned up without bringing customs manifests, let alone 10 copies to be on the safe side. Even though we were in the middle of the line, because our paperwork was in order we ended up being at the front. On the other side were many Turkish people who had been waiting for a long time,  to greet us. Then the Turkish authorities and Turkish brother in our convoy who drove the big truck, asked us to just go through. I can happily say I was first into Turkey ....what an honour, the reception was amazing and it was the first time we encountered IHH our Turkish partners. There are mixed views on IHH but that is the messy world of politics, and being Turkish they tend to get a lot of flak, but one should focus on their good work, regardles sof politics or religion.

After that we waited for everybody to sort their paperwork out and then drove to Istanbul, as usual it was chaos, we weren't told exactly where to go, plus there were no planned fuel stops. So we went solo, and enjoyed the scenery, it was so nice seeing the rural villages dotted around, and then all of a sudden a huge metropolis of a city like Istanbul.

The weather was wet and driving conditions were tough as usual, I was surprised at the vast amounts of open space, it seemed like a very nice chilled out country.

Despite some confusion when we came off the motorway, we caught up with a group led by IHH and they guided us to our evening stop. The first stop was a convention centre where we had dinner and a lovely talk hosted by a leading Jewish organisation that was against the Gaza War; they were very nice and clearly supported Gaza and the Palestinian cause. They were very saddened by the fact that Israel had hijacked their Jewish faith for their own political goals as for centuries it was the Ottoman empire and Muslims that protected them from persecution.

Then it was off to our night stop, which was a sports hall, basketball court. People have mixed views about Turkey, but I was starting to really like it here.

GOOD NIGHT was in the van, parked outside the basketball centre. It was another very cold night

TOP TIP - When going abroad make sure to have photocopies of all your vital documents, even passports and spread them out, so if one person loses a bag, at least somebody else will have copies, which makes it easier to get new documents.

Also remember driving through the European Union is easy, no borders, in fact sometimes you don't even realise you have driven into another country, you only realise when the local mobile phone company sends you a Welcome text, they Welcome you to get ripped off.

Also be warned that outside Europe you are looking at a minimum of £1 per minute to receive a call, so be careful.