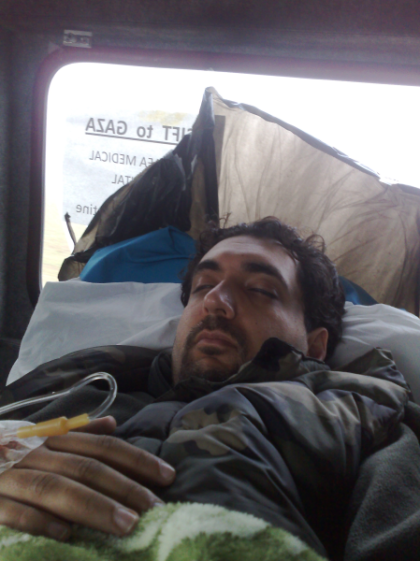 This morning I woke up in the Clinic, to be honest I didn't sleep much, but it was so nice being in a nice warm room, it felt wonderful. Brother Farooq from IHH and two other brothers arirved to collect me, I was worried that they might forget about me, but they were there on time, I was very impressed with the punctuality.

I had my money ready and was going to try and pay but again they all refused to take any money. The Doctor was at home as it was early, but made the effort to come in and wish me well. I was being treated like a celebrity because they were so impressed with what I was doing and the photos from my last trip. In my eyes what I am doing, is something most people can easily do if they really want to do it, but for others, especially non-UK passport holders it is a lot tougher.

I had another injection and was put on a drip, which was attached to the minibus. Almas was a bit worried as he waited around for me last night and was the last to leave the centre car park, but he managed to get my message at the last minute and followed the last person to leave the food Centre to the sleeping Sports Centre. The problem is Almas had a rubbish mobile phone, which to make matters worse was on a Pay As You Go sim, topping up was a nightmare. But we still managed to keep in touch, just about, Alhumdolillah.

So this morning it was a short drive into Syria, there were a few delays at the border, but nothing too serious. It was a very long drive to Damascus and to the Sahara Tourist Resort Complex, or Sahara Hotel for short. It was an oasis in the dessert, metaphorically speaking, it felt like we were still in Europe. We have to thank Qweaver for arranging this, I remember her from my last trip, I was amazed to learn that she stayed behind to continue to work with the Red Crescent and now arranged for us to stay at this 5 star resort.

We had to get into groups of three to a room, we decided to adopt Brother Kashif, but he went on his usual late night adventures and so we ended up having the room to ourselves. It was very nice, and they even had a bubble bath. I was still feeling very rough and couldn't eat anything due to my swollen throat, so this was a welcome releif, Alhumdolillah.

GOOD NIGHT was at the Sahara Resort, it is a lovely place, although the prices are high, thankfully it was all free for us.

TOP TIP - Good communication equipment is crucial on such journeys. mobile phones can be expensive, but I would recommend everybody has a good reliable phone, and ideally a contract, because if things go wrong the problems can be massive. For short-range walky talkies are great and cheap, well worth getting. I would not recommend a Pay As You Go phone unless you have a swipe card and somebody nice and reliable in England who is happy to Top it Up for you, otherwise scrap it.