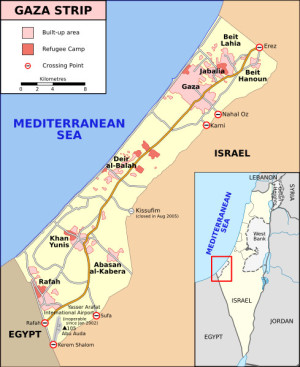 The Gaza Strip (Arabic: قطاع غزة‎ Qiṭāʿ Ġazza/Qita' Ghazzah) lies on the coast of the Mediterranean Sea. It borders Egypt on the south-west and Israel on the south, east and north. It is about 41 kilometers (25 miles) long, and between 6 and 12 kilometers (4–7.5 miles) wide, with a total area of 360 square kilometers (139 sq miles).

The Gaza Strip was occupied by Egypt from 1948–67, and then by Israel following the 1967 war. Pursuant to the Oslo Accords signed between Israel and the Palestinian Liberation Organisation in 1993, the Palestinian Authority was set up as an interim administrative body to govern populated Palestinian centers - with Israel maintaining military control of the Gaza Strip's airspace, some of its land borders and its territorial waters - until a final agreement could be reached. As agreement remained elusive, Israel unilaterally disengaged from Gaza in 2005, saying it was no longer the Occupying Power there. The international community, citing Israel's continued effective control over the area, continues to regard it as an Occupying Power. The fact is that they still control the majority of the Gaza Strip borders, and all of its airspace and have had the territory under siege since June 2007.

The territory takes its name from Gaza, its main city. The population is Palestinian and is estimated at about 1.5 million (July 2009). Refugees of the 1948 Palestinian exodus and their descendants made up 85% of the population as of March 2003. 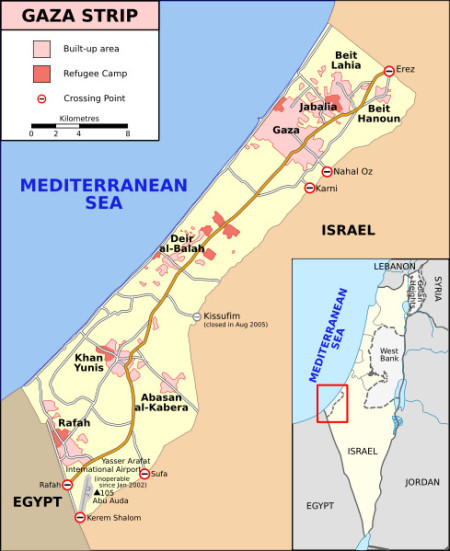