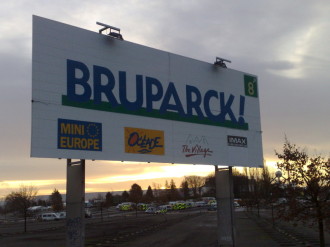 Today we woke up to a chilled morning at the BruParck and lined up, we moved from South Group 6 to Bradford Group 2, and for the purpose of identification became vehicle B9. This was a new numbering system to ensure that we did not loose eachother, and plus were easily identifiable. We then left in convoy towards Stuttgart in Germany, via Luxembourg.

B8 a Mitsubishi 4X4 also broke down, some bright spark decided to bring an LPG converted vehicle, it is hard enough getting LPG in England, let alone further afield and especially in Gaza. To make matters worse they had a water system problem, when LPG conversations take place, they mess around with the water system which can cause problems later. They rejoined quickly and we carried on and arrived in Stuttgart, to another car park.

Also we spootted a LIDL store and went shopping, however it turned out they did not take Visa or Mastercard, we had no Euros on us so ended up putting everything back, so another night of Pot Noddles.

Personally I would prefer to just go on my own but when crossing borders it is better to be a part of a bigger group. My main concern was to get all of my aid and vehicles into Gaza.

GOOD NIGHT was at another car park, but we were so tired so just knocked out quickly. B2 managed to finally roll in about 2-3 hours later.

TOP TIP - Make sure to pick up some Euros, they are obviously excepted in Europe as standard, but increasing also in Turkey as well. Or if you drive past a cash machine, make sure to withdraw some, there might, well there WILL be a small charge but is better than getting caught out with no Euros ....for example if you go shopping in Lidl.

Also for the inexperianced drivers, especialy ones without a Sat Nav, make sure to stick with the Groups, otherwise you will end up getting lost and will be driving around for hours like a headless chicken.