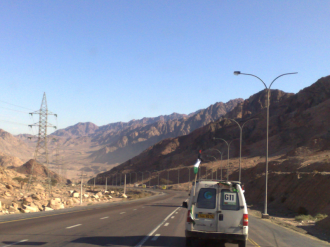 I had a very rough night, I just could not sleep, in fact I was waiting for it to be Fajr time so that I could have a reason to just get up properly. The night was very cold, especially as we were up in the mountains and in an exposed open area. I did Wudu and then went to the Masjid, they had one within the compound, I walked in and it was packed with people snoring away, it was a B-Line of heavy Bass, and the whiff of Body Odour in the air. I was then just waiting for everybody else to wake up so we could get going.

The Turkish were very organised and were up and out in no time at all, whilst our lot were busy faffing around as usual. Eventually after midday we made a move, I was so glad to be moving, even though it was backwards, back up to Syria. We went back the way we came, which was nice as we went past the scenic route.

Customs were a bit easier this time and before we knew it, we were back inside Syria. The irony was that they wished that we would come back again soon, but I doubt that they meant this soon. We headed towards the Sahara complex again. En Route the Muslim Brotherhood had arranged food stops for us, I was still unwell so stuck with light snackes and vegetables.

Checking into the Sahara hotel was a nightmare, as it was a big scramble. We needed to be in groups of three, and ended up adopting Brother Arif, in B10. Another northerner, he is a nice guy, but talks way too much. Thankfully we were destined to have an amazing room, a large suite, Alhumdolillah. It was like an apartment, with nice views and very spacious.

Almas was busy with his smoking buddies and ended up relaxing with them all night, which was fine with us, meant I had the whole double bed to myself. The night was a bit more pleasant but still rough, as I was still suffering from ill health. I was up all night coughing up phlegm and all sorts. People smoking inside the lobby didn't help, especially as they are from the UK and know full well of the dangers of passive smoking. Brothers and Sisters, please give up this dirty haraam habit.

Good Night was at the Sahara Resort Complex in a lovely executive suite, it was amazing, Subhanallah. Finally some good rest, especially after all the drama in Aqaba.

Top Tip - When going to a Hotel make sure to go early. If you are parked nearby, leave your luggage in the vehicle and go check-in first. Also be prepared to split into groups of 3 and have your passports ready. As the hotel will want to hold on to them until you sheck-out.