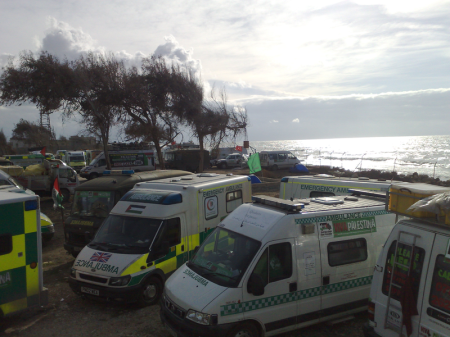 We woke up early and myself, Ziad and Talha decided to head into town, we caught a minibus taxi and he qouted 20 Syrian pound for the 3 of us, on arrival he refused to take money as he realised we were going to Gaza. A fellow passanger, an off-duty policeman took us for breakfast and showed us around town, the people were very kind.

We then headed to the local Mosque for Jumma prayers, to our amazement the Imam mentioned us and our convoy in his Khutbah, so after prayers we went up to him and Thanked him. He wished us well on our journey and was very proud of us.

Syrian people are very sad about the plight of the Palestinians, they all wish that they could do more to help. If the Gaza border was in the hand of the Syrians instead of the Egyptians, things would be so different.

We then headed to an internet cafe, met more people from our convoy, everybody swarms to the internet cafes, we all needed to get online and update websites, blogs and do emails, keep in touch with the big wide world.

Not sure what the rest of the day holds, the people here are very nice and friendly. We are just waiting for news on the ferry, I volunteered to go on the ferry rather than fly out, even though it will be very rough on the seas, I would rather be close to my vehicle and aid, no idea whats install for us. The "organisers" wanted around 60 names, but Brother Zaher and Brother Farooq told me that due to regulations only about 10 people will be allowed to accompany the vehciles, and even then most will be Turkish as its a Turkish vessel. I was happy with that, I trust the Turks with our vehicles.

We heard about the news of the International protestors being battered by the Egyptians, it really is a very sad situation.

Nobody can understand why Egypt is being so difficult, we are all Brothers and Sisters, lets behave nicely and help each other.

Good Night was back at the Seaside compound, in a funny sort of way we were getting used to it, I suppose it was the calming effect of the Sea plus I had good room mates. Brothers Talha, Ziad, Gulfaan and Kashiff, when he managed to make it back.

TOP TIP - Fridays tend to be very quite in Islamic countries, but after Jumma the pace does pick up. Always make use of the internet cafes, plus those parts of town tend to be the safest. Prices are usually higher, but it is better to pay a little extra for your cup of Tea in a nice safe environment. Lattakia was lovely, but as always, best to stick in groups and be alert.