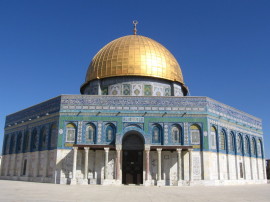 Jerusalem (Hebrew: יְרוּשָׁלַיִם‎ Yerushaláyim; Arabic: القُدس al-Quds) is at the core of the overal conflict. It was totally invaded and occupied by Israel during the Six-Day War of 1967, and on 30th July 1980 they passed the Jerusalem Law at the Knesset which established Jerusalem as the capital of Israel. This then led to the UN Security Council Resolution 478, which was adopted by 14 votes to none, with 1 abstention (United States of America). It declared that the Jerusalem Law was "null and void" and "must be rescinded". This resolution called upon member states to withdraw their diplomatic missions from the city. Even today most embassies are based in Tel Aviv.

The population of Jerusalem is about 763,800 over an area of 125.1 km2 (48.3 sq mi) if disputed East Jerusalem is included. Located in the Judean Mountains, between the Mediterranean Sea and the northern tip of the Dead Sea, modern Jerusalem has grown far beyond the boundaries of the Old City.

The city has a history that goes back to the 4th millennium BCE, making it one of the oldest cities in the world. Jerusalem is the holiest city in Judaism and the spiritual center of the Jewish people, it contains a number of significant ancient Christian sites, and is considered the third-holiest city in Islam. Despite having an area of only 0.9 square kilometer (0.35 square mile),the Old City is home to sites of key religious importance, among them the Temple Mount, the Western Wall, the Church of the Holy Sepulchre, the Dome of the Rock and al-Aqsa Mosque.

The old walled city, a World Heritage site, has been traditionally divided into four quarters, although the names used today-the Armenian, Christian, Jewish, and Muslim Quarters-were introduced in the early 19th century.

In the course of its history, Jerusalem has been destroyed twice, besieged 23 times, attacked 52 times, and captured and recaptured 44 times. Today, the status of Jerusalem remains one of the core issues in the Israeli-Palestinian conflict. Israel's annexation of East Jerusalem has been repeatedly criticized by the United Nations and related bodies,and Palestinians demand East Jerusalem as the capital of their future state.

BBC Panorama Documentary - How Israel is trying to control Al-Quds (Jerusalem) and then destroy Masjid Al-Aqsa ....

CLICK HERE to view an Interactive History of the importance of Jerusalem to Muslims and Jews. 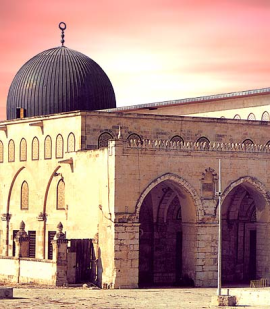 In the Qur'an, the term الأرض المقدسة (Al-Ard Al-Muqaddasah, English: "Holy Land") is mentioned at least seven times, once when Moses proclaimed: "O my people! Enter the holy land which Allah hath assigned unto you, and turn not back ignominiously, for then will ye be overthrown, to your own ruin." (Surah 5:21)

The Holy Land (Arabic: الأرض المقدسة, al-Arḍ ul-Muqaddasah; Ancient Aramaic: ארעא קדישא Ar'a Qaddisha; Hebrew: ארץ הקודש Erets HaQodesh; Greek: Άγιοι Τόποι Agioi Topoi; Latin: Terrae Sanctae), generally refers to the geographical region of the Levant called Land of Canaan or Land of Israel in the Bible, and constitutes the Promised land. This area, or sites within it, hold significant religious importance to at least four monotheistic Abrahamic religions: Judaism, Christianity, Islam and the Bahá'í Faith. Part of its sanctity stems from the religious significance of Jerusalem, the holiest city to Judaism, the third-holiest to Islam, and part of the proposed Christian Pentarchy.

Islam and the Holy Land

Sharing similar religious beliefs with Jews and Christians, Muslims consider the land west of (but not limited to) the Jordan River to be sacred, as mentioned in the Qur'an.

The first few months of Islamic history considered Al-Aqsa Mosque in Jerusalem to be the first Qibla (direction of prayer), as opposed to the Kaaba in Mecca. Both Jerusalem and Al-Aqsa Mosque, are considered to be the third holiest places for all denominations of Islam. In Arabic, the city of Jerusalem is commonly known as "Al-Quds", meaning "the Holy".

Muslims also consider the depression below Mount Sinai, known as "Tuwa", to be sacred as mentioned in the Qur'an as the "Holy Valley" (الوادي المقدس):