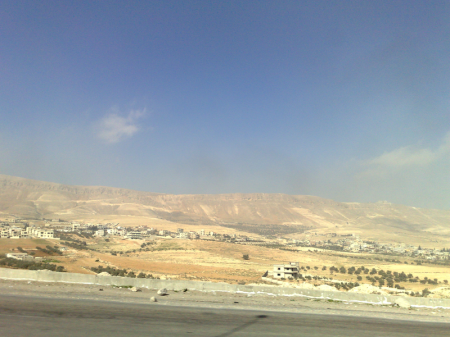 We woke up early and left the Sahara Resort and headed towards LATTAKIA a Port Town. We went directly to the Port but were then told to leave and head towards a run down Beach resort, turned out there was another change of plan.

They had originally ordered 3 small ferry's but now there was bad weather up ahead, and they found out that the ferry's had no loading bay, meaning almost 2 days would be needed to lift ach vehicle on to the boat via a crane. So they needed a new bigger ferry. Well that was the official story, in reality israel decided to extend the exclusion zone and the ferry's felt threatened so they decided to cancel the contract. Either way, another fine mess.

Thankfully there was one available in Libya, it has unloaded and is on its way to Lattakia. Some of us will travel with the vehicles on the ferry and others will fly out, well that the plan at the moment. Again a big Thank You to Turkey and IHH, or as they say Eee Haa Haa.

Many people are annoyed at the changes of plan and being kept in the dark by the organisers, the best place to get information from is the Turkish Delegation, they are very open and honest about these things. Many are booking flights back home via Damascus, as the ferry will not arrive until for another couple of days. Plus there is still a lot of uncertainty.

GOOD NIGHT was in a beach hut which looked like a prison cell, it was a great location but very run down, time to rough it again. It reminded me of that old movie Papilion with Steve McQueen and Dustin Hoffman. New Years went with a bang, over 2 hours of non-stop fireworks here, I had an early night, just want to get to Gaza.

TOP TIP - Make sure to build in extra time off, last year we were delayed by a few days, and this time more delays. Some people were gullable enough to believe that eveyrthing would run smoothly, dream on. You have to factor in crap organising, double dealings by tyrant governments, broken promises, hidden agendas, and all that other stuff. So make sure to have at least a 7 to 10 day safety buffer zone.