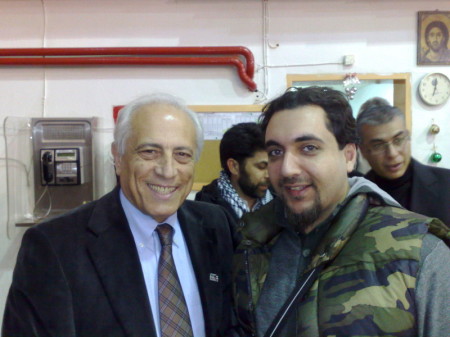 Greeted by the Mayor

We arrived at round 6am local Greek time, it was a nice chilled morning. Then it was a long drive to Thessasolonikki, I was expecting some sunshine, however we were met with ice cold temperatures, rain and even snow. We drove up some amazing mountains (Subhanallah) and the engineering of the new motorway netwrok was amazing as well, but I can also tell you the long drops were just as spectacular.

After a very long and tough drive we arrived in Thessasolonikki and I was greeted by the local Mayor, who was very supportive and gave us the local Sports (Basketball and Volleyball) Centre for accomodation.

Also a word of warning, the Greeks love pork, so be careful when ordering food, they don't understand the concept of vegetarianl. They bought boxes of sandwiches for us, and B1 (the chubby chap) ran in and started scoffing them down, and half way through he noticed a funny taste, and asked them what it was ....the local said "don't worry its not Pork (chubby carried on munching) ...it's HAM" ....you can guess the rest.

So Vegetarians, Jewish Kosher and Muslim Halal, please be careful in Greece.

We were able to stay there, the plan was to stay a couple of days and use it as a catch-up day. B4 had a big engine problem, basically in England he got a DIY mechanic to "top-it-up" and he put in too much engine oil. This caused the pressure to rise and it resulted in back pressure as the seals were clearly gone, and he had oil in his air intake pipes. To top it all off he knew things weren't right in England but carried on doing a 1000 miles of hard driving, plus its a Mercedes Sprinter. Lesson to learn, is don't be a DIP STICK use your DIP STICK properly.

GOOD NIGHT was at the car park of the Sports Centre as we didn't fancy sharing an indoor Basketball Court with another hundred odd brothers, snoring away and creating a heavy bass line through out the night.

TOP TIP - When in Greece be very careful of the food, any food, chances are it will have Pork in it, even the desserts. And when you see the juicy doner kebab meat, its not lamb or chicken, but Pork so BE CAREFUL.