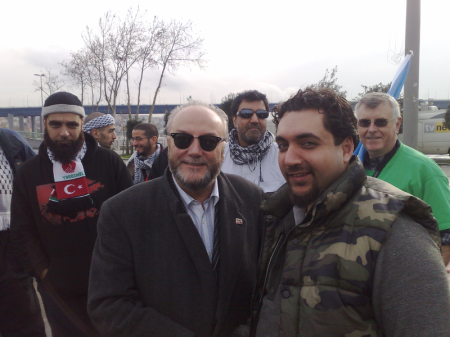 We woke up to another cold morning, and I quickly made my way inside the centre to freshen up and grab some breakfast. Then there was a quick meeting, and a telling off to those people that went through the border first, as we 'should' have let the organisers and the Turkish truck driver go first, even though he told us to go through. This is how idiotic the organisers are at times, as sometimes it is more about political points and photo opportunities for them, rather than just getting on with the task at hand. But all interesting stuff.

Afterwards we all began to make our way to the centre and to FESHANE near EYUP which is like a big car park near the sea, in central Istanbul. We were guided to the place and even had air support, a helicopter was hovering around above us. I have to say the pilot was very skilled and kept going around in a perfect circle, which meant I could plan and take my photos well. There was a gathering and then the Big G, George Galloway himself turned up, he remembered me from my previous trip to Gaza, and especially the Libyan incident, I think he was still a bit disgruntled about that, but thats what happens when you mess with the Professionals like myself, I am not here for politics, just here to get a job done.

The rally and press conference were good and packed, but then they had this stupid idea of splitting up in groups and doing laps around Istanbul. Why people would want to waste deisel sitting in traffic jams is beyond me, needless to say many ran at the chance to drive around and blare their horns, I decided to take in the sites.

We had a good stroll, changed some currency. Then afterwards when they all came back, we were herded onto coaches for another rally at TAKSIM SQUARE, as you can guess, I didn't fancy jumping up and down in the cold evening, so decided to stay behind. In fact quite a few people wisened up and stayed behind to rest and recover. We decided to go one step further and have a proper wash, so went to the Hammam. I can tell you, I have never ever felt so clean and soft, it was well worth the break. The 16th century building was truly amazing.

We then headed towards ADAPAZARI and SAKARYA. This was to be a very long and tiring drive, as you can imagine a lot of people were annoyed that knowing we had a long drive ahead of, they took a lot of time on the press conference, then the silly drive around the city, then the jumping around session in Taksim Square, and now a long 3-4 hours drive, in nots so great weather.

I'm just glad we decided to do our own thing and relax. Sakarya is a nice modern looking town in the middle of nowhere, we were escorted to a sports centre, and given some food. Ironically we had to buy the drinks form the sports centre, plenty of people just grabbed them and then there was a show down with staff. To be fair, considering the long day, expecting people to pay for soft drinks and water was ridiculous when we were invited there as guests by the locals. We were then taken to the Town Square to park up and were to be bussed back to the sports centre. As usual I opted for the smart option, which was to sleep in the minibus in the town square, why waste time bussing here and there and more faffing around in the morning, it proved to be a great move.

GOOD NIGHT was in the minibus (again) in the Town Square of Sakarya, to be honest I really liked this small town, it was very clean and nice.

TOP TIP - Press conferences and rallies are great, but the aren't the bee all and end all. On a journey like this my first priority is to get myself and my aid to Gaza, quickly and safely. Driving around in circles wasting diesel and then jumping around like a monkey is further down the list, way down.

Also be diplomatic, sneak off quitely, don't make a scene as we should do our own thing, but also respect the group convoy unity as well. But at the same time, no point following like a Lemming off a cliff. 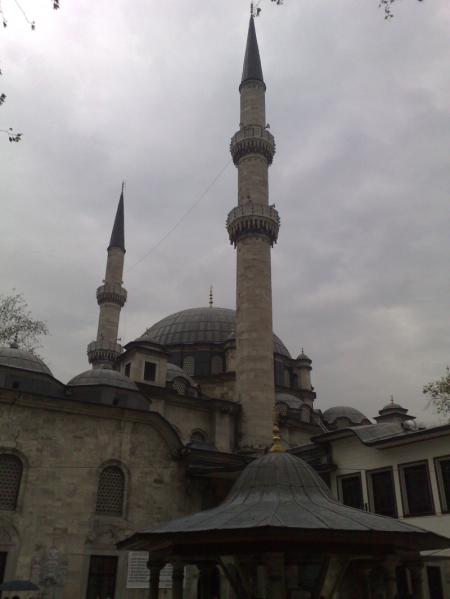