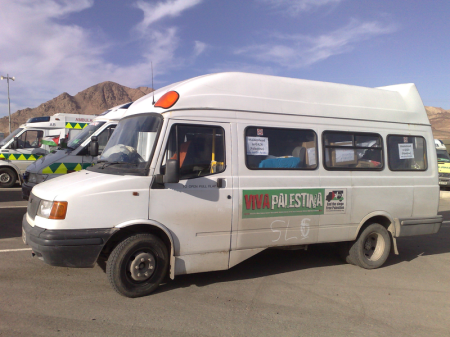 I cant say I woke up, as I was awake all night, I was waiting for Fajr time so i could have a reason to get up and do something. It was very cold but the views were amazing, the mountains and blue skies were wonderful, Subhanallah.

We were then bussed back into the Muslim Brotherhood Compund, this time we made sure to take some clothes and such, so filled up a travel bag.

The day was spent walking around the compound and Aqaba, I was actually sleeping in the Compound, I still felt so rough and ill, the infection was not going away. Plus not knowning what was happening made it worse, I just wanted to get going.

Today was a quick day, the G UNIT found a hotel and so me and Almas made our way to it. However as we re getting closer, the area of town was getting worser, trust the G Unit to be wondering around this  part of the neighbourhood. We checked in, I made sure to haggle as he was trying to tip us off, and also wanted us to hand our Passports. I told him very clearly to take a photocopy and give my Passport back to me now, he complied. Guard your Passport with your life, unless it is at a 5 star resort and will be looked after proeprly.

Good Night was at the most dodgey hotel in town, it was run by Muslims but we later discovered that it had a bar/restaurant upstairs and downstairs run by chinese people who like to give guys a massage service .. you can figure the rest out for yourselves. To be honest I really did not like it there.

TOP TIP - Shop around for Hotels and when on a trip like this make sure to haggle and explain why you are here. Some photos always help, my previous Gaza photos won a lot of sympathy and helpful discounts. A penny saved here, will be a penny more for Gaza. Guard your Paspsort with your life, avoid leaving it with the Hotel if you can avoid this, legally they only need a photocopy, thats all.