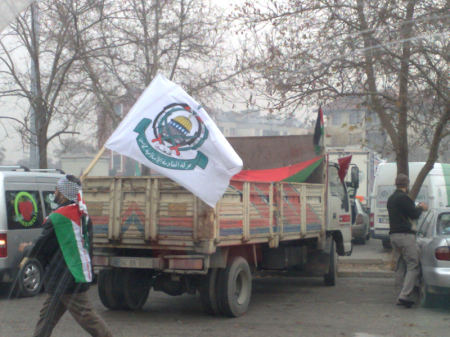 We woke up to another cold start, we decided to do a Shower Dash around Fajr time, before the crowds got to them and wrecked them. No matter how hard you try, after a few hundred people hit the showers, they look like a tip. We managed to get up early, especially as we ditched our group, and were nice and fresh.

We headed to another rally, this wasn't so bad, but then again I decided to watch it from inside the van, I didn't bother to get out. And then the worst happened, I don't know what it is with northerners, but Almas decided to clean our Kettle. I've cleaned it a few times, I usually use a clean wipe, but my Northerner buddy decided to smash it on the floor to dislodge the calcium limescale, and then he was wondering why the Kettle wouldnt work, maybe it was becuase it based around on the floor ....duh.

The problem was everything was based around that little cigarette lighter Kettle, our Breakfast, Lunch and Dinner snacks were Pot Noodles, which needed boiled water. And our drinks were Tea and Coffee, which again depended on hot water.

We had a power invertor and other Kettles but the problem was heat element items suck a lot of energy, and out imvertor just could not cope. So we were buggered.

Then it was a long mountainous drive to Adana. We were now 'forced' to be back in the group, plus Almas was driving today, and he didn't want to cross our muppet group leader. So we were stuck on our slow drive, for some reason maybe just to annoy us, our group leader was on our arse end behind us, and he put that idiot in B2 in front of us, despite our complaints about his reckless driving.

Then whilst going through a three lane tunnel, there was a big red coach in the middle lane, the idiot in B2 tried to undertake it by speeding down the right hand lane, we pulled back and decided to over take it properly, by going into the left hand lane. Then out of the blue, the idiot in B2 saw Almas veering to the left, and the idiot cut across from the right lane, across the middle and into our lane, and hit the front end of our vehicle.

We were SHOCKED because it was so dangerous and stupid, worse of all he drove off at full speed, we just about pulled over safely to pause and compose ourselves. It was one of those, life flashing moments when you think its almost over. Then the muppett group leader drove up, conveniently missing everything and refusing to believe that B2 would have done the damage.

I so annoyed that the punk didn't stop, then double annoyed at the idiot group leaders response, so I decided to call in the G Unit, and asked them to pull the B2 idiot over. They caught up with him and boxed him in and gave him a good scare. Sadly they both went the wrong way, so we missed each other, in fact we arrived at the night stop first and waited.

We were so fired up and angry, I saw it as my duty to get all of my Humanitarian Aid safely to Gaza. When the punk finally arrived he went into hiding, but we caught up and he refused to even acknowledge it. I could not believe the arrogance of this idiot, he saw us, hit us, and drove off. He was now too scared to come out and assess the damage, I replied with a few stern pushes and was very close to smacking him hard, but several people intervened. The punk nearly killed us and was now being and arrogant shi*t, Almas had his steel toe cap boots on and was also ready to rip him apart.

A few brothers stepped in and as it was in the middle of the sports hall, we decided to let it go for now, as we didn't want to offend the hosts. Amer (Z2 - one of the main organisers) was nearby and I made sure to take this to the Organisers, I wanted the damage to be fixed. Nikki (Y2) also over heard and was supportive, she also complained about that idiots driving and was confronted with arrogant denials and a bad attitude. I wanted him sent home, as it wasn't the first instance and was clearly going to case more problems, especially if that idiot crashed into a local vehicle. I prefered my first trip to Gaza, when I was able to get on with it, but this time round the Respect Party clearly wanted to use it as almost an advertising bandwagon for their Party, so they seized the Organisational aspect.

The damage is evident, you can see in the photos below. Again you will not be shocked to learn that the idiot in B2 was non-practising. Many people across the groups had serious doubts about him, he was at the centre of most problems, especially by taking endless photos of people and invading their personal space.

GOOD NIGHT was in the van, although to be honest we couldn't sleep, we were still on shock and angry at the manner in which nothing was being done. It was a high speed crash, we were doing about 65 miles an hour ourselves, and that prick was going faster thn us.

TOP TIP - If you can set up a video camera on your dashboard to capture the idiot drivers. If somebody is driving like an idiot, make a formal complaint, it will cover your back and trust nobody.