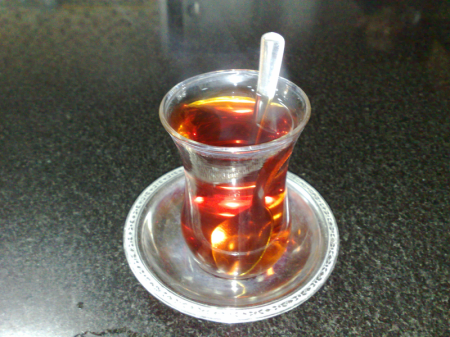 We woke up to another very cold night, but we were all so tired that we just knocked out. It proved to be a great move not following the other Lemmings, as we slept well and were fresh. We moved out early and headed towards ANKARA and then our final stop for the night, KONYA.

After an hour or so of driving we stopped at the Service Station, and we had a cup of CHAI (Tea), it was so nice and warm. They usual a special kettle to boil the water, feel free to ask your local Turkish Kebab Shop for more information. They also had prayer facilities for Men and Ladies at the Service Station, so we all rested and prayed, we combined Dhur and Asr together.

They did serve food as well, but it was the usual rip-off UK Service Station prices, so we decided to give it a miss and just enjoy the Chai.We then headed towards a giant stadium just outside ANKARA, it was nicely decorated with a huge sign outside welcoming us and with a giant Palestinian flag. Inside they had a talk and a Nasheed show, conducted by some brightly dressed guys, it was like a show. I must admit that I didn't watch all of it, I was busy hunting down lunch. Then just as we were about to leave the muppetts in B8 decided to pop their bonnet and wanted to ask Almas to change the fan belt for them. As you can imagine we were not pleased, so decided to shot off with the rest of the pack.

Just as I pulled out and reached the gate, the Respect Party appointed 'chumchaa' ran out 'demanding' that I do not drive off and wait, I told him just how stupid they all were and ....drove off. We were at the stadium for a good 2-3 hours, they had plenty of time to sort the fan belt out, but instead decided to waste time posing for the cameras and on watching the show and following speeches.

I must admit my blood pressure was getting higher, this convoy is useful when it comes to Visas and issues at the Egyptian / Gaza Border, but putting up with their non sense and complete sh*t is ridiculous. They appointed this idiot to lead our Group not because he was a good navigator, nor a good driver, nor experianced, nor a good team leader, but purely because he was a member of the Respect Party. I've got nothing against the party, but this idiot did not have a clue about driving with a convoy and was a real hinderence. I brought my own Humanitarian Aid and vehicles and wanted to ensure they reached Gaza safely, that was my primary concern, and not this stupid group, or self-appointed team leaders.

Today was also the night of idiotic driving, and the lead performer was the idiot in B2, he could barely drive, and then kept causing so many near misses. On one occasion we were at a traffic light cross-junction. In front of me was Y2 (Nikki's vehicle, main logistic organiser), then it was our B9 and behind us was B2. He had an issue with us being in front, so decided to jump the red light to get ahead and caused a near miss with an oncoming white van from the right side. To be honest I wish it had hit him, just to teach the idiot a lesson. Y2 was very shocked, as was I, there is no place for idiotic driving like that on a convoy. So we made an official complaint in writing to our muppett group leader, who decided to do nothing about it, which proved to be a big mistake.

We then drove for a few more long hours and arrived at KONYA and to the Selcuklu Congress Centre. This was a very modern giant sports centre complex, and had very nice shower facilities. We arrived late and thankfully with the 'real convoy' pack, the other idiots from our group managed to arrive several hours later. They decided to stop a few miles away from Konya to eat, even though dinner was to be served here; inline with the whole convoy ethos they should have travelled with the bigger group, and ate and prayed together.

The big problem was that the idiot running this group is non-practising, so was not bothered about sticking together or having prayer breaks. I have got nothing against non-Muslims and people of other faiths, but I do find it somewhat annoying when a Muslim, especially of advanced age, deliberately decided not to practise, in my opinion this then sets a bad exmaple to others, especially the younger generation.

GOOD NIGHT was at this lovely sports centre, but once again we opted to sleep in the minibus as it was a bit too crowded.

TOP TIP - Stand your ground, leaders need to earn respect just like everybody else. You need to lead by example and not be stubborn and not act as a hinderence. On convoys like this it is best to stick with the Convoy, and especially locals groups, they are invaluable.

It really is stupid to straggle behind and take your time, if things go wrong you will be out in the lurch without any local support. You need to do whats right for you and your mission, which for me was to deliver my aid quickly and safely.