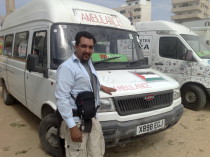 What 'we' do and the people 'we' Help

Since June 2007 there has been a blockade around Gaza, in effect it has became a giant prison full of civillians, who live a daily life of hardship. Most of the time all the borders are closed, which means that vital goods can not reach the people who need them most. During my first trip to Gaza in February/March 2009 I helped the following organisations:

During my second trip to Gaza in December 2009 / January 2010, I focused my efforts on entirely helping EL WAFA REHAB. HOSPITAL and ELDERLY CARE HOME. Plus also various poor widows and orphans from the Khan Yunis Refugee Camp.

Meet some of the many people who 'we' have already helped. 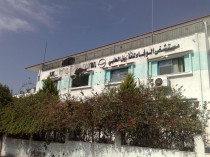 The plight of EL-WAFA REHABILITATION HOSPITAL and ELDERLY CARE HOME is what motivated me to drive all the way to Gaza. I was awoken to this tragedy following the blockade in June 2007, however the horrendoues bombing of Gaza by israel in December 2008 really upset me very much. I had read stories that Israel had deliberately bombed a Hospital full of disabled and elderly patients who could not be evacuated. I had to see if for myself, and I was truly shocked by what I saw. The main Hospital building was visibly damaged, their generator was destroyed thus preventing them from using the elevator, and due to lack of an ambulance, patients had to be cared one by one. Due to the fact that most patients are Quadriplegic, it meant at least 4 people were required to lift each patient. They were moved to other parts of the Hospital but still shots were fired at the Hospital and the staff room was still riddled with bullet holes.

The EL-WAFA ELDERLY CARE HOME was also attacked, but most sadly the Hospitals New Facility was badly damaged and is unusable due to the blockade, it really was very sad and shocking. It is bad enough that the patients are suffering due to their disabilities, most are amputees or Quadriplegic, which means they cannot use their limbs (arms or legs), or elderly; but bombing and firing at them is really very inhumane and shocking. The Hospital is run entirely on donations, and I must admit that despite the hardship it was the most cleaniest Hospital I have ever seen, and the patients seemed happy and comfortable, despite their pain. I want to ensure that both patients and staff stay happy and above all, stay safe.