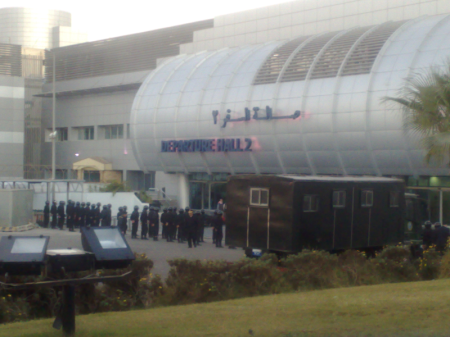 We were bussed into Cairo in the dead of night by a Police and Military escort, the Egyptians ensure that our route was clear and that the roads were deserted. Even the service station we stopped at was emptied of regular customers and normal Egyptian people, they are so afraid of the normal people meeting with us. Around 3am we arrived at Cairo International Airport, but we were dropped off outside the INTERNAL Flights Departure building. I grabbed my bags and went off to the nearby Mosque to relax and pray Fajr Salaah, which was just after 4am. I stayed until about 8am and then ventured outside to look for an ATM (Cash Machine) with Muhammed (UK-Libyan Brother, raised in London but currently living in Jordan) however we were confronted by Stormtroopers and some of the most stupid Egyptians ever.

They were lying and forcing us to go into the building and slowly trying to hen us inside, we refused as our luggage was still at the Mosque, a mere 50 metres away, yet the Egyptians were too afraid to let us go back and collect our bags. Eventually they allowed one of us, to go back with a police escort, after an hour of heated verbal discussions, thankfully Muhammed speaks fluent Arabic. It was a ridiculous situation, created entirely by the Egyptians. It is sad, these Stormtroopers are all uneducated poor children, who are brain washed and believe anything. They were falsely told we had come to destroy their country, which is absurd. They are doing a good job of destroying their own country by letting military dictators ruin it.

They kept pushing us along and eventually after much confusion bussed us out to the actual International Departure Terminal. Then they tried to detain us in a small room at first, but we all kicked off, then they took us to Gate E which was closed off and detained us in a long corridor, with access to one single toilet.

They had our passports so we were stuck. In reality they did not need our passports, they held them so we would not run off. In fairness they were under orders, and some of our people were complete idiots. One Beligian woman for some reason didn't take her luggage off the bus which took us to this terminal and now wanted to go back and get it, which wasn't going to happen easily. Others preferred to argue instead of just book a flight and get out of their. To be honest I was annoyed that those egyptian thieves took $15 for an entry visa off me and were now kicking me out, that is disgusting behaviour, all of the Egyptians that I encountered were a bunch of theives.

I thankfully had my ticket booked as we left Gaza, and then we were frog marched to the check-in desk and after some persuasion our guard gave our passports back and let us relax in the departure lounge. I felt sorry for the people who had booked tickets for Wednesday or even Friday, a week away, a week on the cold hard floor of Gate E.

We were all so happy to set foot on the airplane, and get out of that rotten country. they treated us like criminals, it was shocking. They are sell outs, they sell themselves to israel and america, and then we drive thousands of miles to help the Palestinians they attack us and accuse us of all sorts. They really are nasty people, and in the eyes of the world are looked down upon and are losing respect day-by-day. If they are not careful, then people will eventually hate them us much as israel. Both of them have worsened the situation of the Palestinians for many years, they think the problem will just go away, but it wont. Not until their is real justice and honesty.

Some of the soldiers and officers were nice BUT what I don't understand is that, they are intelligent but don't do anything. Their country is run by a tyrant who talks about Jerusalem but since 1981 has done nothing but talk, what has he achieved? Nothing. Egypt does not need an army as they take money from israel and america to avoid fighting, the army is just used to surpress the Egyptian people. It really is a sad situation, they used to be so brave and fight for Palestine, now they just sit and opress their fellow Egyptian citizans, how brave ....not.

Good Night was back in my bed, mission accomplished.

TOP TIP - Never trust the Egyptians, they are the most dishonest people I have ever come across, and it is double disgusting that most of them claim to be Muslims and yet are causing so much suffering to the Palestinians by not opening the Gaza, Rafah Crossing border. My words may sound harsh, and obviously not all Egyptians are like this, but the ones I have met were. They treated me and others very badly, even at the airport when we were leaving. It is well and truly time for change in Egypt.

Also book your flight early, get somebody in the UK to keep an eye on flights, as soon as you leave Gaza, book it about 18 to 24 in advance. It takes about 6 hours to get to Cairo from the Rafah crossing. But despite all of the stress and head ache, it was all well worth it.