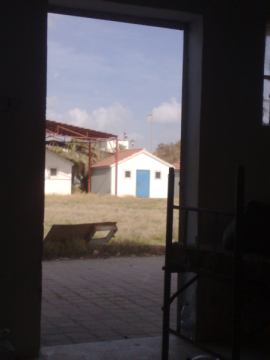 We woke up to plenty of hussle and bussle in the morning, the flights had been arranged, and the groups were getting ready to depart. Basically there were going to be 3 seperate flights, with one aircraft doing a shuttle to El Arish in Egypt and back.

We the G UNIT were stuck on the last flight, which was perfect, nothing worse than going first and then having to sit around and wait for the others to arrive. The first flight went well and took off around 4pm, but then the second flight which left around 8pm developed engine problems and diverted to Amman for repairs, so those people were stuck. For us, we boarded the bus to leave for the airport and part way the bus did a you turn and came back to the Seaside Coumpund.

We finally thought we had said 'good bye' to that place but were back again. It was late, and so we just founf any random chalets and went to sleep. The side which my original Chalet 3 was on had a power cut, so we had to move to the other side. Sadly it was one previously occupied by americans who left it in a mess.

We didn't sleep for long and were woken up around 3am and told to board the buses, the problem was that the bus drivers had gone home and to bed. So they had to take one of the 3 buses out to bring the drivers back, so it meant another long delay and flared tempers.

Some people were getting very annoyed, others were smoking like chimneys, I have to say it was very sad and disgusting that these 'muslims' were smoking in a bus full of people, knowing many did not appreciate this rude behaviour.

Good Night was oviously back in the chalet and the bus, it was a weird night, full of drama.

TOP TIP - Always expected the unexpected, and have plenty of snacks ready, you never know what will happen. Plus make sure to have a good torch, those cycling head torches are nice, you never know when the power will fail.