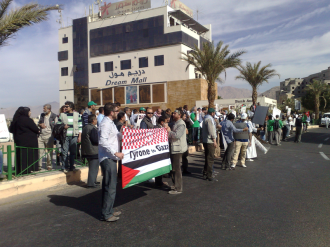 This morning many of us woke up early to observe Fast as it is Ashura, then there was a meeting at the compound at 9am local time. Then at 11.20am local time there was a 3 minute Silence to commerorate the anniversary of the start of the isreali attack on Gaza. It was beamed live across the Middle East. Afterwards several people volunteered to go on hunger strike, including Brother Ziad, who travelled with us on the first convoy.

Also Brother John from Ireland had arrived, he had matured so much since the last trip and was very focused and passionate about the cause. It was great seeing him back again, especially as spirits were low and people needed a bit of cheering up, bring on the Pady.

Then there was March towards the Egyptian Consulate in Aqaba. The Protest got as far as the Dream Mall, near the Mosque but then the local Police requested that we stop, and get the proper permission for the safety arrangements. Which was fair enough as we must respect local laws and regulations.

So now the protests are goign on and people are starting to get annoyed with this waiting around and wasting time, especially as a lot of medication is going to start to spoil unless we get it to Gaza soon. The Diplomatic Red Tape issue is "created" and just an uneccasary hurdle, especially as we have come so far without any problems, there is no need for the Egyptians to be worried.

GOOD NIGHT will probably be at the Al-Zaitouna Hotel again, it is very nice that they have decided to put us up for free, Alhumdolillah. It is also a great Hotel, easily a 4 star.

TOP TIP - If you want to protest, then do it properly. But at the same time keep it focused and don't annoy the Police, try and involve them. Sometimes it can become confrontational when neither sides communicate properly to each other.  Also remember to a certain extent we are sheep being herded here and there, but it is better to be the wolf, know your surroundings and be prepared. Situations like a simple protest can flare up easily abroad.