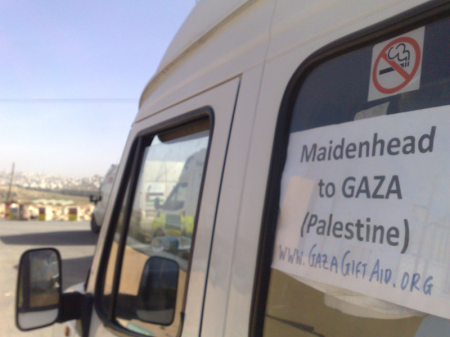 Today we woke up early and checked out of the Jerusalem Hotel, and then were bussed over to the place where our vehicles were parked up. I must say that the Jordanians did a wonderful job of guarding our vehicles and then we were guided out.

Going out was a bit of a mess and in random order, in the end it turned into a giant mess. The problem was as usual down to the organisers, they were nowhere to be found and did not tell us what the plan was, where we were going and which route. You can get to Aqaba via the Dessert Road, or the Red Sea border route. So we drove out when we could, and just followed some vehicles, then some vehicles did a U-turn, so we followed them, then others went another way so we followed them and then in the end everybody was lost.

However we then made our way to get some fuel and right next door was a MacDonalds, Almas ran in and picked up a couple of meals. We then drove off, and focused on my trusted GPS which is a Garmin and honestly a great piece of kit, although downloading new maps is a real pain in the back side.

Eventually we came across Group F which was led by Keiran, and decided to stick with them for a while. Keiran is a veteran at convoys and had previously organised some to Bosnia, he is ex-forces so knows what he is doing and I must he was without a doubt, the best Group Leader. A great guy and with a great brain, a real brown, not like most of the other Group Leaders who were full of that brown stuff you find at the bottom of a toilet.

We parked up at what appeared to be a Customs Compund just outside Aqaba, and then were bussed into a Muslim Brotherhood Compound in Aqaba. Behind it was a very lovely Church, it was very picturesque and reminded me of how we can all live together in peace. From Aqaba you can see the bright lights of occupied Palestine (israel) this really upset a lot of people especially when you look at how the Palestinians are forced to live in refugee camps whilst these foreign invaders lap it up on this occupied land.

Tonight was another organisational mess, there were no plans for sleeping and such. The highly organised Turiksh Brothers camped in the Compound and the Ladies were taken to houses and apartments. We were left to fend for ourselves, but the problem was that all our sleeping gear was in out vehicles, back at the Customes Compound, which was a good 20 minutes bus ride away. I was still not well and feeling worse, plus was having a few nose bleeds. I managed to make my way back and slept in the minibus, Almas decided to stay at the Compound, but in the midlde of the night changed his mind and came back to the minibus.

I don't want to sound like a moaner, but I was very ill and needed somewhere warm and comfortable. Not being informed about the situation made matters worse, the organisers knew a lot mroe than what they were telling us, this made the situation worse. The IHH Turkish brothers were more informed, in the end I went to them for information.

GOOD NIGHT was at the Customs Compound in the minibus, back to roughing it again. Because it was on an open palteu it was freezing cold at night, I couldn't sleep, the air was too cold.

TOP TIP - Don't rely on anybody, especially not the organisers. Look our for number one and build up local contacts in advance, just as a safety net. What I found was that the 'organisers' wouldn't tell us where we were going in advance, so we would not beat them to it, but then if as usual problems occured and we got lost, we really would be lost. It is vital that convoy drivers know exactly where they need to go to, its essential.