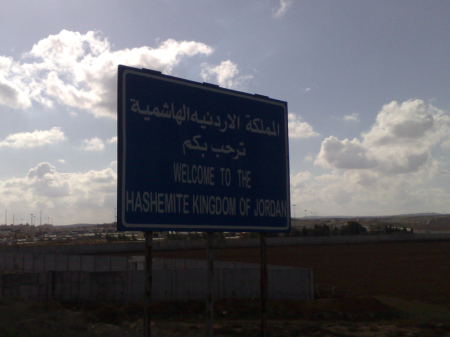 Today was the day we said Good Bye to Syria and were Welcomed into Jordan. The morning was a very long one, we spent an exceptionally long time at the Broder, the customs people even X-Rayed my entire vehicle and made us sit around for several hours and then took my passport away as we were leaving the border.

I was having some very nervous thoughts, especially after what happened in Libya last year. But none the less I gave it to the officials and we drove towards Amman, to be honest I was still too ill to question them.

Then on the outskirts of the Amman the Police wanted to take us around, rather than through the centre, all of a sudden it all kicked off. There was some miscommunication and the organisers misunderstood the intentions of the Police and all of a sudden there was a massive protest and arguements right on the motorway. It really was crazy.

The organisers assumed that we were going to be ditched outside the capital somewhere ...the authorities wanted to avoid people going missing by going around the outskirts and cutting in through a quite area ....then after an hour of arguements they agreed to take groups of 10 vehicles through the city centre, 10 at a time ....thankfully I made sure to move our vehicle to the front and right side so we went off with the first batch of ten ....it took about 15 minutes to reach our destination, so now imagine about 150 vehicles going in groups of 10 every 15 minutes ....that equals a very very long time.

I have to admit, this time the organisers really kept stuffing up time and time again, there was too much paranoia and assumptions. In the end after 2 - 3 hours people were still arriving to the food Centre, which was part of the Professional Workers (Engineers) Association of Jordan. Thankfully there was a Pharmacy opposite so I stocked up. I was exhausted and feeling very unwell and wanted a bed, eventually we were taken to the Jerusalem Hotel.

The other big problem was that apart from Brother Zaher, no other organiser speaks Arabic, which is a bit silly as it is so crucial. I have started to learn it myself, hopefully I will be better prepared next time, Inshallah. The first convoy in February 2009 was a last minute mission, so mistakes and dramas were expected, but this time they had ample time and warning, plus money (including our £100 joining fees) to prepare properly, yet in terms of organisation it was a lot worse. Thankfully IHH and our Turkish Brothers and Sisters were there to support and prop us up, Alhumdolillah.

GOOD NIGHT was straight out, knock out. I was shattered, it had been such a long day.

TOP TIP - Don't assume anything, get your facts ready first. To be honest it would have been better to have some locals high profile people meet us at the border and guide us and explain the route in advance. Especially as there have been many months to plan this trip. But not to worry, we made it, Alhumdolillah.