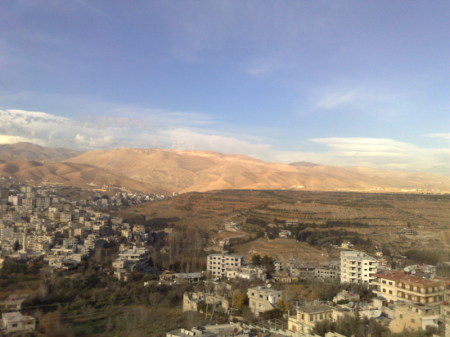 Today was a day of rest, we sure did need it, in fact I more than anybody as I was still feeling very rough. The problem is the mixture of cold weather, diesel, dirt, fumes and tobacco smoke from the smokey joes in the group was a bit too much for me.

On the subject of smoking I have to say that I was shocked at the number of 'Brothers' with long beards puffing away on cigarettes. Even I know that most scholars now regard smoking as Haraam, because it is scientifically proven and established that it kills, so it is like a slow form of suicide, which is forbidden. Previously it was classed as Makroor, disliked, but it is Haraam now. Plus it is harmful to others, my buddy Almas is a heavy smoker, and he loves the roll-ups, but he was nice and courteous enough to cut down and smoke outside following my illness, others weren't so nice.

The view out of our window was amazing, as was hearing the Adhaan during the day. I spent the whole day resting at the hotel, most ventured outside into the city. Then there was another debate regarding the Masjids (Mosques) that were shrines, and this issue of having tombs inside Masjids. But I was too tired for it all, so had an early night.

I was also surprised to see our journey on the news, throughout Europe there was virtually no coverage, but in Turkey and especially Syria, all that changed and now we were becoming the big news story. I think it is very important that people know that they can all do more. If ordinary people like us can do something like this, with minimal resources, together we can all do a whole lot more, Inshallah.

GOOD NIGHT was at the Sahara again, it was very nice to have a small break but we all wanted to getting going soon.