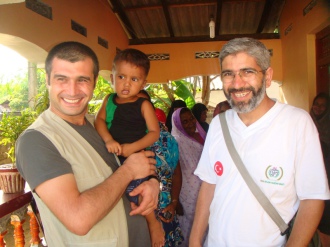 Today's page is dedicated to Faruq Aktas (Right) a legendary IHH leader who sadly passed away in an airplane crash in Afghanistan in May 2010. He was without a doubt the most humble and nicest person I met throughout this journey, and greatly missed.

Woke up feeling horrible but more focused. We confronted the other passengers from B2, which was a group of girls, and I say 'girls' because they were not mature enough to be classed as women. Girl 1 was an English revert, she was in the passenger seat when they hit our vehicle, she was full of blatant and screwed up big time.

Basically we saw her in the morning and said we wanted a word, straight away she squelled out about seeing a red coach and going over a bump and then asked us why we wanted to speak to her, we did not even mention the red coach, so it proved she knew what we would talk about and had this dishonest cover story about 'going over a bump' clarified in advance. So sad to see girls in Hijab telling blatent lies.

Girls 2 and 3 were not much better, claiming to be fast asleep. Girl 2 was Smokey Joe, a chronic chain smoker, but out of them she was the friendliest. Girl 3 was the most contraversial, apparently she borrowed money from several group members and did not pay them back, this caused a lot of tensions and even arguments which a lot of us witnessed.

Why people turn up without funds is beyond me, too many see this as a jolly or a holiday, it makes the Convoy look like a laughing stock when compared with professional Aid Convoys. Especially when you look at the amazing IHH Turkish Charity, they are amazing because their people make them amazing, all mature and here for the right reasons.

Our Group Leader was a complete jerk on this issue, he tried to down play it and even accused Almas of dangerous driving when we pulled over after the collision, only a complete pathetic jerk would say something like that; Almas was in shock, that B2 idiot hit the front drivers side ona motorway, Almas had every right to be in shock.

Plus it was pure and simple negligence on the Group Leaders part, they had been warned by many people, even Y2 (main organiser) about the driving of the B2 idiot as he had caused many problems already. I was double fuming, bad enough they put an idiot in charge of our Group, but even after this very dangerous high speed deliberate collision, they refused to send him home. They sent others home on lesser issuse, plus B2 didn't bring any Aid or a Vehicle, so he should have been sent straight home.

The first thing we did was rip off our B9 stickers and join the G UNIT as G12. I still went to the group B meeting just to hear the usual crap. Basically the idiot group leader refused to punish the idiot in B2 as he was his 'official photographer' we all thought it was a sh*t excuse, he would spend all day photographing the convoy members and emailing them back to the UK, stooge.

That night he apparently lost all his camera charging equipment, ironically we had nothing to do with it, but many of the convoy members were becoming sick and tired of his antics. Events like this attract genuine people, but also sabteours and government paid stooges.

So off to a new start, today we left Adana and headed towards GAZIANTEP. Sadly after the collision and endless cold nights, I was starting to feel very rough. So much so that once we arrived at our evening dinner stop, I was unable to eat, even though the food looked lovely.

I then tried to find an English speaking Turk who could direct me to a local Doctor or Pharmacy, I was feleing very rough. After much waiting, eventually some very nice Turkish brothers who offered to take me to a local Clinic. This is when I first met brother, Faruq Aktas from IHH. (Sadly Faurq Aktas was on an aid mission in Afghanistan and died in an airplane crash on 17th May 2010 http://www.ihh.org.tr//es/main/news/0/our-friends-martyred-in-afghanistan/689)

They drove me to the Clinic and I was examined by the Doctor, I actually felt a bit embarrassed as I was looking rough and didn't smell so great, plus was covered in sweat. He diagnosied me with a very serious Chest infection, and a Tonsilitis throat infection and also a mild cold as well, and then came the injections and drip with Penicilin. They recommended that I stay the night, and refused to take any money.

It was definatley the nicest Doctors Surgey / Clinic I had ever been to, they were so nice and professional. They brought me biscuits and Chai, and the room was lovely and en-suite, totally perfect. I had a great nights rest although kept waking up to cough green phlegm (flem), felt like cr*p but it was good to have a room and bed.

GOOD NIGHT was at the Clinic, on a drip. It was nice to finally have a proper bed, although the circumstances could have been a lot better, as my good buddy Azir commented on Facebook, "Raz you will do anything to get a bed" ....it cracked me up ..but even I wouldn't go through that pain again, plus the injections and drip. But the kindness of the IHH staff, and the Doctor, and the Nurse was amazing, even the Orderly who brought me biscuits and Chai. I had money ready, but they all refused, because I was a Musaffir on my way to Gaza, for a good cause, Alhumdolillah.

TOP TIP - Learn some local phrases, especially in case of emergency, and mingle. Plus have faith, depsite the pain, I still prayed and made sure to be still pray, even in the Clinic. Everything works out in the end, Inshallah.