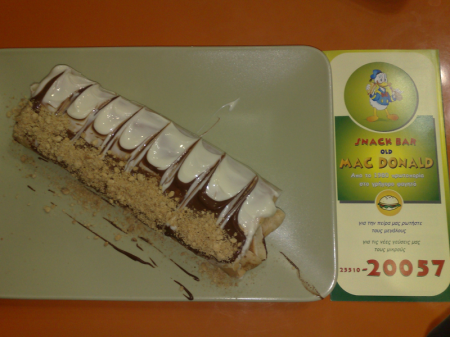 We woke up to another freezing cold morning, and had to move out early. We decided to shower up, they prefer the old open style showers so you will need somebody to guard the door, or have a shower with your underpants on. Our Police esort arrived around 9am and we set off for ALEXANDEROPOULIS.

B8 in the LPG 4x4 along with B4 (Camper Van) decided to stick around to find a garage and sought out their engine problems.

B1 (Mr Haji-HGV driver and Chubby Chap) plus B6 and B7 the (Bradford Boys) decided to head out very early, they may have gone in the night. So only my B9, B2, B3 an B5 were left from my Group, so we all just drove out with the masses, only Group C seemed to be organised and still in formation.

Then it was a straight road (the A2) past KAVALA and direct to ALEXANDEROPOULIS. We had a good drive through some mountainous roads, with amazing views. Greece is an amazing country.

I am at an internet cafe in ALEXANDEROPOLOUS now and hope to get some filling food. Just had some 'Pizza Cones' they are small pizza but the base is like and ice-cream cone, and you eat it like an ice-cream, weird but nice.

The photo above is of a pancake style dessert, it was so heavy and filling that I struggled to even get half way through it. All hand made freshly, made to order and just so heavy, but a well deserved treat. This is all of course to gain much needed 'energy' for my onward journey, it has to be done.

GOOD NIGHT was at a little caravan camp just up the road from the internet cafe. We were a bit lost and a nice local chap who lived on the opposite side of the road and further down from the camp guided us. He noticed our van and told us how he did some Aid Work and went to Pakistan after the earthquake, very nice chap.

TOP TIP - In Greece most internet Cafes are open throughout the night, so if you don't fancy sleeping in a shabby tent or in the cold van, stay in the cafe BUT be warned, they also smoke like chimneys inside. Every PC comes equiped with an ash tray, crazy but true.