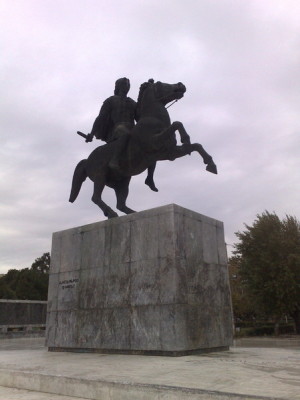 Today we had to wake up early and cleared out the basket ball stadium as there was going to be a match later today. So we had a Police Escort to the city centre, we did a drive-by to promote the Gaza - Palestinian issue. The locals were very receptive as we parked up along the sea front.

In the afternoon we went off to hunt down an internet cafe but found out that most shops are closed on a Sunday, so we went to grab some Pizza. We ended up in Pizza Hut and as soon as the Manager found out why we were here, it was Pizza all round and as much as we could eat. It was amazing to see such a reaction from a non-Palestinian and a non-Muslims who just see the human suffering and want to help, truly amazing.

Anyway the day just got better as I managed to find an internet cafe, just sat here now, so I'm making the most if it whilst everybody is busy having seconds and thirds at Pizza Hut. Almas had a bit too much and was struggling back, he really was well and truly stuffed. But we both felt happy to have a proper meal for once, the Pot Noodles were getting tedious.

We were all looking forward to heading to Turkey tomorrow, it is crossing from Europe into another part of the world.

GOOD NIGHT will hopefully be in the van, at the Basketball stadium tonight.

TOP TIP - On Sunday most places are closed in Greece, however in the afternoon some places tend to open up, so be warned. The main city centre and near the seafront is the best place to go and there is always a Pizza Hut if you want to be safe and have some Veggie food.