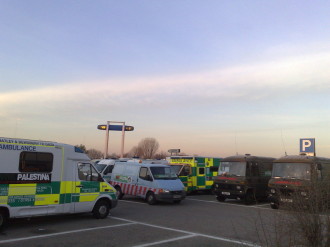 We woke up to frost and pure cold and headed striaght into the service station, they had showers but we decided to wash with baby wipes and head out quickly to ANCONA so we could relax there is it was a short drive, only about 180 miles away.

The drive went really well, people are finally getting used to driving as a convoy and our average speed was a good 60 - 70 mph.

We went straight to the Porto area, however were then picked up by local Palestinians supporters who took us to our night spot, and guess what ....another car park. This was the worst car park ever, and had no facilities at all.

So firstly B6 and B7 (Bradford rebels) decided to head off, one of the B6 guys fell off the van whilst doing an A Team style maneuvre around the car park, holding on to the back whilst the other guy drove around the car park, ....so he grazed his arm, over acted it a bit and using the excuse of going to the hospital, they left.

Then B4 under pressure from his nagging wife decided to go as well, she didn't fancy another night in a shabby out of town car park. To be honest they seemed to think it was some sort of Camper Van holiday, they had their Mercedes Sprinter van kitted out like a holiday home and wanted to see the sites, eat out and have a good time. Clearly not on the Humanitarian Aid Convoy mindset. So despite best efforts to stay together and get the organisers to sort something out, they went off.

Then we B9 decided to head out as well, we really felt grubby and didn't fancy sitting around in the car park. Fair enough we were expecting a few rough nights, but at the Birmingham meeting we were told no more than 2 or 3, but it was coming to 5 now, plus the local Italian Palestinian supporters were only informed of our arrivel 2-3 days ago, they said they wished they knew earlier so they could prepare for us. Pior Planning Prevents Poor Pefromance came to mind, but I do take blame as well because I felt I could take a back seat this time and allow others to take up the responsibility of planning.

So we left and decided to find a pizza place. Even though we didn't have enough money budgeted for a Hotel, we at least wanted some Pizza. We found a small pizza place, after paying I noticed some Palestinian and Islamic Artwork, and so asked the guy about them and showed him our vehicles. It turned out YES he was, he gave me a full refund, donated money on top, plus directed us to the local Mosque, gave me the keys to the restaurant and allowed me to stay the night.

The local Mosque is just opposite the train station, and slightly towards the left there is a road which is upwards. follow it and on the right is the Mosque.

We also bumped into B6 and B7, they were outside the hotels opposite the train station, surrounded by Polizie (Police) no doubt up to no good, so we just quitely walked passed and headed to the Mosque. One of the guys from B6 later told us that they were accussed of being foreign refugees so were rounded up for questioning, that must have been a laugh.

GOOD NIGHT was at a lovely Italian restaurant, it was lovely so we were more than happy. nice mattress and hot showers. Even though the owner just met me for a few minutes, he happily handed over the keys to me and said tha I can have anything, I thanked him for his support.

TOP TIP - Don't worry, there is always a silver lining, just be patient.