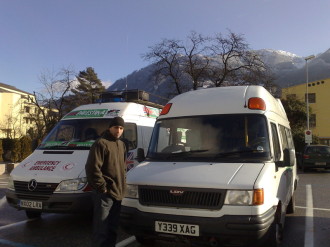 Woke up to a very beautiful view of the mountains, we were surrounded by amazing mountains, but it was freezing cold.

We had a long team meeting as certain people had issues,  the biggest problem was that unlike me, most of these people didn't buy their vehicles, so they were careless drivers. After having bought several minibuses I've learnt to appreciate and respect them, yet sadly getting drivers can be a problem so you end up taking all sorts ..there is a reason why most can spare such a large amoutn of time away from home, but thats another issue.

We made some positive changes, we put B3 in front, which was the recently retired Nick who thankfully drives like a boy racer, and Mr Haji the experianced HGV driver was put at the rear to make sure nobody gets lost and to rescue any break downs, and B10 were allowed to bugger off and join another group. They were nice enough kids but clearly were not expecting a paced convoy drive, plus giving them a lighter vehicle was not a good idea. My understanding was that 4x4 vehicles would not be allowed into Gaza by Egypt, so I was surprised to see them, there were about 5 of them in total.

Even though we are all strangers, we are here for a common cause, if we were to drive as single vehicles then we would not get far, let alone to Egypt. By going as part of a bigger convoy supported by several MPs, it adds much more weight, plus the cameras with live satelite link-up always come in handy in the parts of the world we will be venturing to, so it really is a case of safety in numbers.

We headed towards Austria, again there was virtually no border, straight down. We stopped in a small town called SCHWARZ to convert money and help B8 get some LPG Gas, which was like finding a needle in a haystack.

We then headed towards MODENA, the drive was good, B2 stopped abruptly, some brief mechanical failure, but my mechanic put it down to 'driver' failure, they caught up and we carried on as a convoy. We arrived at our nigth destination, an AutoGrill service station, another car park night.

The Pizza Bar was closed so it was some chips and a salad with bread, plus some fruit tonight. We were so looking forward to some pizza in Italy.

We watched the Inter Milan football match at the service station restaurant and knocked out.

GOOD NIGHT was at the service station car park, the night was the coldest so far, with minus temperatures. This was our 4th straight night in the vehicle and people were starting to get annoyed.

TOP TIP - Stay away from the Group Politics and in-fighting, to be honest the first time I went to Gaza I was largely left to get on with it, this time around I have to stick with a Group, which means carrying the excess baggage as well. Worst of all the Group was led by a politcal party member, who could barely drive and was as smart as a doughnut, and thats me being generous. There were better more experianced people in the Group, there was Nick (retired Chap) and Mr Haji (ex HGV driver), all better experianced and more skilled, but due to party politics, they put their own puppett in charge of the Group, that was in my view a receipe for disaster. I favour meritocracy, it has a proven record of bringing the best results.