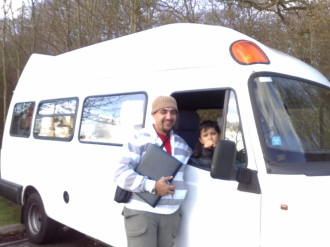 Saturday night was an all nighter, as I had to go through each item and one-by-one repack everything. Plus produced the cargo customs manifest which took all night long, in total managed to condense everything down to 33 large boxes, down from well over 50 boxes. All the vehicles were filled up with Humanitarian Aid.

We were hoping be at the M3 Clackett Lane Service station by 9.30am which was then extended to 11.00 am but we cruised in at just after midday ....and surprise surprise they were still sat there at the car park waiting for others to arrive. It was nice bumping into others who went to Gaza in March 2009. We stayed at the service station for a couple of hours as other late people straggled in, glad it was not just us.

Bradford convoy had a few problems, Sid lost a wheel on his way down, which is ironic considering he is a Tyre Fitter by trade, and a group of 15 ambulances were in London for a press photo shoot, and trust one of them to collide with a London Bus ....a disasterous start is probably the best way to start these journeys, you get an idea of what to expect ahead.

We then made our way to Euro Tunnel and took the train across to France, we drove to Belgium and towards Brussells, we took the R0 (R-zero) ring road to Junction 7a and stopped at the EXPO car park C. Today was about 150 miles to the Euro Tunnell and another 130 miles to Brussells.

GOOD NIGHT was in a car park in Belgium, it had some clean facilities but was way out of town. To be honest everybody was so tired that we just knocked out.

TOP TIP - Don't worry about being late, because worse case you can always catch up. Last year I was a couple of days late, but caught up at the main border crossing into Morocco. The ferries and EuroTunnel run around the clock, so don't panic. The main thing is to be 100% ready and then set off, no point rushing and limping off only to encounter problems later. In fact last time I was running over a day late, but still caught up. Driving through Euorpe is easy with a UK passport, so chill and be safe and prepared.