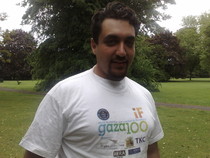 Thank You for taking the time to view the website, I hope that you found it useful. Please rest assured that this swanky website was created by myself, every donation goes directly to those who need it, and usually directly in to their hands. If you have any suggestions for improvements, please feel free to let me know by leaving a comment below.

Please feel free to make a Comment and give Feedback

What makes Gaza Gift Aid different from all the other People, Groups, and even Organisations and Charities supporting Gaza?

Initially in February 2009 I myself wanted to donate some money to help those in need, but I found that firstly there was a blockade around Gaza so most of the Aid never reached Gaza.

Secondly, most of those People, Groups, Organisations and Charities were geared up for initial Disaster Relief, thus mainly provided blankets, food and clothing.

Thirdly, they also have a lot of Admin Costs, Marketing Costs, Logistical Costs, Warehousing Costs etc. They are heavily regulated and have to go through a lot of red tape.

Fourthly, sadly some have their own hidden political or religious agendas. I found that from every pound I would donate, not all of it would reach those who needed it. I wanted to go and do it myself, make sure my help reached those that need it most.

So I decided to make sure that every penny reached those that needed it. So now I am offering a personalised approach, Hand to Hand, primarily direct to EL-WAFA REHABILITATION HOSPITAL and ELDERLY CARE HOME plus also to Orphans and Widows in Khan Yunis Refugee Camp via the EL-WAFA CHARITABLE ASSOCIATION in Gaza.

Why do you care so much about El-Wafa Rehabilitation Hospital and Elderly Care Home?

I care about other Hospital in Gaza as well, I visited the Phosphorous Burns Unit at the Al-Shifa Hospital, which is the largest and best equiped hospital in Gaza. Sadly Hospitals such as El-Wafa are often overlooked by larger Aid Organisations. El-Wafa mainly care for Quadraplegic (disabled) and Amputee patients, plus also elderly people who are immobile; thus they tend to require more long-term care.

El-Wafa was also attacked during the recent conflict, in fact their new hospital building is non-operational due to the extensive bombing and lack of building material to rebuild because of the continued seige. Plus I must admit I feel extra sad as the patients they cater for at El-Wafa are either Quadraplegic (loss of use of all four limbs, disbaled and immobile), Amputee's or or very Elderly; so I feel as though I should do more to help.

Plus El-Wafa is less than 1km away from the israeli border, therefore is regularly attacked. A few years ago an israeli sniper shot at the hospital and killed two Nurses. The staff at El-Wafa are always in constant danger, but they still turn up to work to help the patients and elderly residents. Despite the hardship, it is the most cleanist hospital I have ever seen and very professional.

Does what you do actually make a real difference?

When I went to Al-Shifa and El-Wafa Hospitals, most of the patients were reluctant to take money, they were in fact more happy to see that I was able to break the seige and came to visit them. The blockade has meant the media have largely been unable to enter Gaza and report the true horrors of this conflict. With your help, in a few weeks I was able to make a positive impact on the lives of many people and really cheer them up and bring a smile to their faces. The LDV disabled access minibus was able to make a huge immediate impact, previously when El-Wafa Hospital was bombed, they were unable to evacute the patients as they had no transport, now they are in a much better position. So, YES it really does make a difference, every little helps.

My LDV disabled access mini-buses, have now become a fleet of vehicles, which allow El-Wafa to take pateints home for 2-3 days a week, a weekend with their families makes a huge difference to them and helps their recovery. Plus they can now be taken for days out and other therapy, so it has had a massive positive impact.

You can't really expect to bring peace and stop this conflict?

Negativity will get you nowhere, if everybody did their bit, in terms of raising awareness and helping, then peace will come about. This is a complex issue and I am not here to dabble in politics, my aim is to use my spare time better, and just help those who need help on a humanitarian level. Peace will eventually come, but if people turn a blind eye to the conflict, then the situation will only get worse, so its time we all did a bit more to help.

The Nazi occupation of France was over turned with action at all levels, the racist Apartheid regime of South Africa was over turned through boycotts and people speaking up. Action at all levels will eventually bring peace. If you steal somebodys home and force them to live in refugee camps for over 60 years and refuse them the right to return and attack them, then you will never have peace. The seige around Gaza is only making matters worse, every nation needs to Trade to survive, no one nation can survive without trading, let alone a small strip of land measuring 25 miles by 7 miles. Concessions have to be made for Peace to prevail.